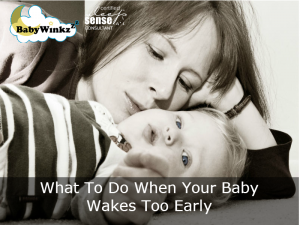 What can you do about an early riser?

I’m going to give you about four or five things today that I call my early morning checklist that you can go through and see if you can nip this little problem of when your baby wakes too early in the bud.

If you’ve just started The Sleep Sense Program though, I want to reassure you that the early morning wake ups will fade out. I find that within the first week or two, they’re fairly common. It’s just your babys bodies way of consolidating and organising some night time sleep. They might wake up at the five o’clock hour feeling pretty refreshed, but that will pass with time. Don’t panic.

If you’ve been working on this for weeks, months and youre still stuck in this early morning wake up, I want to give you some suggestions.

The first suggestion is to make sure that the room is dark enough. I know that seems like not that big of a deal and you’re probably thinking its dark enough, but the slightest change in light from the middle of the night to morning can stimulate a wake up.

It stimulates a wake up in almost all of us, but we look at the clock and realize its not time to get up yet. A baby is going to wake up and think its time to start the day. I always tell my clients, I want the room to be as dark at 5:00 AM as it is at 3:00 AM and do whatever you can to keep out the tiniest bit of morning light.

Another thing is noise.

Birds start chirping. Dustbin trucks start rolling by. Whatever kind of environmental noise is going on can stimulate a wake up, so run some white noise or run a fan in your childs room. Just try to block out some of that extra noise. Thats stop number one.

Tip number two is to hold on tight to your minimum. For me, it would be 7:00 AM. I don’t want my kids to get up before then, so I’m not going to allow them to. I find that even 5 or 10 minutes, if you let them get up at 10 to, then its 20 to. Now its a half an hour before. It has a way of creeping earlier and earlier. You really do want to stick to your minimum.

The next thing you are going to want to do is have a look at your bedtime.

It’s tempting to think that its probably too early. I always get fear in the eyes of my clients when I say, I want you to move the bedtime earlier. The worry is that they’re going to wake up even earlier.  Five o’clock now is four o’clock. The truth of the matter is that most of the time, early morning wake ups are happening because of over-tiredness. Try. Move your baby’s bedtime up by even 30 minutes and see if that makes any difference to the morning wake time.

One thing to think about as well is that our bodies take time to adjust. Just because you’ve moved bedtime one night and you didn’t see any change to the morning, it doesn’t mean it’s not going to work. I always tell people you’ve got to give things two weeks to see if there is any kind of change.

One last tip. You want to have a look at what your child gets as soon as he or she wakes up. Sometimes, especially if your child really loves to nurse and nursing has been a big part of their sleep associations, they could be waking up prematurely because theyre really looking forward to that experience.

Hang in there. I know its a tough spot to be in, but it will pass.

Is My Baby Sleeping too Much? Signs Your Child Should Stop Daytime Naps
Scroll to top