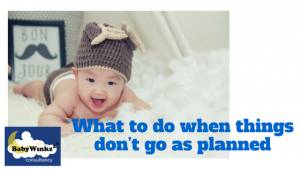 Chances are, if you’re considering hiring a sleep consultant, you’ve done a little bit of reading about sleep training.

Alright, truth be told, you’ve probably looked at about three hundred different websites trying to find out how to get your little one to sleep through the night.

And somewhere in all of that surfing, you’ve undoubtedly seen people raving about how their baby started going 11-12 hours a night without so much a peep, within a couple of nights.

So you followed the advice, did everything that you were supposed to do, but here it is a week and a half later, and your baby is still howling for you five or six times a night and things don’t go as planned.

So what are you doing wrong?

Well, maybe nothing. The truth is, some babies take longer to develop those glorious sleep skills than others. Some have formed strong associations between their props and the process of falling asleep. Others might have a significant sleep debt that they’re working on, and will take a little longer to get into the swing of things. Furthermore, some babies, let’s face it, just have a different temperament, and are going to put up more of a resistance when you try to change their routine.

Just like crawling, talking, reading and teething, developing great sleep skills takes some kids almost no time at all, and takes others a couple of weeks.

So if you’ve decided on a sleep training program, I suggest you stick with it, and withdraw from the online conversation for a little while until you’ve given it a chance. Too much advice and too many success stories can cause you to second guess your approach before it’s had time to take effect. Changing things up just as baby’s starting to get used to the routine is one of the biggest saboteurs of sleep training there is.

I often recommend people start a diary when they begin sleep training. It’s amazing how easily we forget the progress that baby makes in the first little while, because we’re so eager for that “miracle morning” when baby finally sleeps straight through the night. A diary will give you a good look back at just what you were dealing with when you first got started, and it’s important to celebrate those small victories and incremental successes. Seeing progress, however small it might be, can be the inspiration you need to keep at it, even when you’re feeling like things aren’t getting better. Now, all of this is not to say, “Everything’s fine! You’re doing everything right! Just hang in there!”

Because hey, maybe you’re not! I’m not trying to be critical, but maybe you are actually doing something wrong. And if you think that’s the case, my suggestion is to look first and foremost at bedtime.

When you put baby to bed, what’s the last step in your bedtime routine? Does it involve baby getting some heavy eyelids, or getting just to the edge of falling asleep, before you put them into the cot?

This approach works for some babies, but if you’re having some trouble getting baby to sleep straight through the night, this is probably the thing I’d suggest you tweak.

Some babies wake up drowsy and go back to sleep drowsy, so they’re okay with some soothing and drowsiness before they get put down. Others, however, wake up wide-eyed and alert in the night. They’re the ones who need to learn to go from fully awake to asleep all on their own.

Although I know it seems counter-productive, if you think this might be your baby’s issue, then do whatever you need to in order to keep them wide awake through the bedtime routine and put them down in their cot before they start getting drowsy. That doesn’t mean, “at the first sign of drowsiness.” Figure out when they start getting drowsy in the routine and make accommodations to get them into the cot before it happens.

After a few nights of this, you should be noticing an improvement, but if not, don’t give up! Babies love to, and need to sleep, and if yours isn’t sleeping well, there’s a reason. We just need to find it, so call me for a free consultation and we can discuss it further.

5 Top Tips for traveling with your baby this Christmas

Should I Hire a Sleep Consultant?
Scroll to top