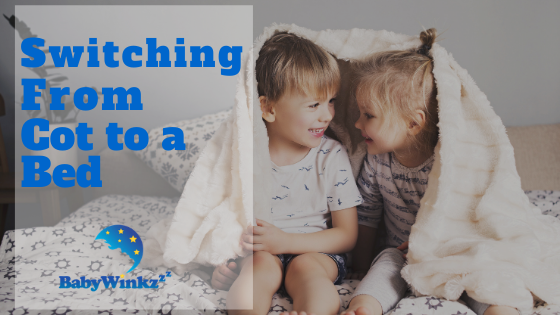 Switching From a Cot to a Bed

When it comes to making the transition from a cot to a big-kid bed, there are two questions that need to be answered. The first is when, and the second is how.

Now, if you’re reading this on my website, chances are that you came here looking for some advice about teaching your little one the skills they need to sleep through the night.

And if that’s the case, then the answer to the question of “When” is, quite simply, “Not now.”

1 – There is No Rush to Transition

There are two reasons why I say this.

The first is because there is absolutely no rush to get your toddler out of their cot and into a bed. I have seen plenty of 3-year olds sleeping happily in a cot and none of the clients I’ve worked with ever told me, “ I wish we’d transitioned him to a big kid bed earlier.”

There is a theory out there that suggests the longer a child is in a cot, the more attached they grow to it, and the tougher it is for them to make the transition when they finally do, but that theory is, for lack of a better word, wrong.

2 – There is an adjustment period

The second reason is that if you’re about to start sleep training, there’s going to be a period of adjustment as your toddler learns to fall asleep independently, and that’s going to take a little getting used to. During this adventure, it’s comforting for your little one to have a familiar place to sleep. Her bedroom, her sheets, her lovie, her cot, everything that can stay the same should stay the same until she’s mastered the skills to fall asleep on her own.

I should add here, just in case you’re considering sleep training, that switching to a big kid bed is going to be a whole lot easier if your little one is already sleeping through the night. A toddler who is well rested and able to fall asleep independently is far less likely to leave their room at night, which is the single biggest issue that parents run into when they move their little ones out of the cot.

Alright, so let’s assume that either your little one is already falling asleep on their own and sleeping through the night, or that, for whatever reason, you’re in a hurry to get your toddler out of the cot and into a bed.

3 – Get Prepared to Transition from Cot to Bed

You’re going to want to fill your little one in on what’s happening. Explain to them that they’re going to be making the move into the new bed, set a date, and let them know when the switch is going to happen. When you explain what’s happening to your toddler, make sure you do it with a positive spin.

So there’s a bit of tight-wire act to be performed here. On the one hand, you want to prepare your toddler for the switch, but at the same time, you don’t want to make a huge production out of it. Turning the whole thing into a monumental occasion puts a lot of pressure on your child and is likely to stress them out a bit.

Now that it’s time to actually make the trip to Ikea and pick out the hardware, be sure to bring your toddler along.

(Prepare yourself for the onslaught of requests for items that have nothing to do with your intended purchase, possibly from your child, but more likely from your own brain. “Oh hey! What a neat colander! Only six bucks? How can I NOT get it?”)

4 – Go Shopping Together For the New Bed

Giving your child some input into which bed she wants, what sheets she likes, what pillows feel the most comfortable, will obviously ensure that she gets something she likes, but will also help her feel a sense of ownership over her new bed, which can work wonders in easing the transition.

If you’re really adventurous, you can even let your little one help you put the new bed together, although speaking from personal experience, I suggest that you do, you know, literally anything else. The mere thought of a toddler and an unassembled piece of Ikea furniture in the same room gives me the shivers.

So now that it’s put together and the sheets are on, you’ll want to keep the bed in the same place the cot used to be. In fact, you’ll want to keep just about everything exactly as it was in your toddler’s room except for the new bed. This is a big change, so try not to make any unnecessary additional changes.
This goes double for the schedule on the night of the big event. When you’re getting your toddler ready for bed on that first night, don’t alter the routine, don’t switch up bedtime, don’t try to give her a new food at dinner. Keep everything as predictable and mundane as possible.

Again, you don’t need to make a production out of it. Tell her you’re proud of her, but try to avoid statements like, “What a big girl you are now!” Toddlers are typically in a perpetual state of uncertainty about whether or not they want to do this whole “growing up” thing, and we want to keep things as low-key as we can.

So now that your toddler’s been put to bed and the light’s been turned out.

There Are a Few Different Scenarios That Can Play Out

The solution to the latter two of these situations is the same. Offer a warning when your toddler demonstrates the unwanted behaviour, tell them what the consequence is going to be if they do it again, and then follow up on that consequence if and when they repeat it.

Chances are that you’ve already discovered a consequence that works on your toddler, and I strongly suggest you keep that it place. Again, we don’t want anything to change except for the bed, so keep doing whatever you’ve been doing up until now in regards to managing behaviour.

In case you haven’t discovered an effective consequence yet, I find that taking the lovie away for a short period of time and closing the door all the way are both pretty functional without putting your toddler into hysterics. For each repeat offense, increase the length of time that the door stays closed or the lovie stays out of the bed.

That Pretty Much Sums It Up Folks

Explain what’s happening, keep things light, set the expectations and enforce the rules. It’s not always going to be easy, but it is pretty straightforward.

One final thought to keep in mind… As much as we’re trying to keep this transition as stress-free and smooth as we can, remember this: You are the boss.

It’s almost a mathematical certainty that your little one is going to buck a bit about this change. She’ll probably leave her room a lot, she’ll call for you to come in, ask for a glass of water, and more than anything, say that she wants to go back to sleeping in her cot.

It’s crucial that you hold your ground every step of the way here, especially during the first few weeks. If you start bending the rules and allowing her to climb into bed with you, or letting her get back into the cot, this process is going to go on for months.

So harden your will, maintain an air of calm authority, and enforce the rules firmly and consistently. It may make you feel like a bit of a tyrant at times, but it will get your little one sleeping peacefully in her new bed a whole lot sooner. 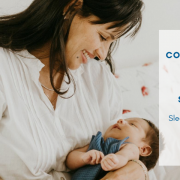 Toddler Sleep Issues – Sleep Association – The Use of Props

How to manage a toddler and a baby
0 replies

Maintaining Your Child’s Sleep Schedule Over the Christmas Holiday