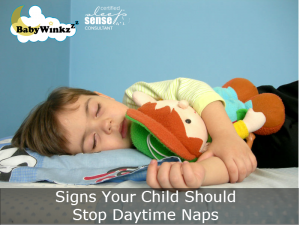 Today I want to talk about,

Signs that it may be time for your child to stop daytime naps. I know that’s a sad day for a lot of parents. Trust me. I’ve been there twice but there are some things you should start to look for that may be an indicator that your child just really does not need that afternoon nap any longer.

Where I find the problem arises is that most children will happily take their afternoon nap. They’ll seem tired. They’ll go down well.

They’ll sleep for a good two hour nap but the problem arises at bedtime where they’re just not tired enough at 7:00 PM to settle in for the night. What tends to happen then is that there’s a lot of game playing going on at bedtime.

I can remember with my own children, they would be happily singing and having a little party in their cot but this would go on for an hour or more every night.

Then they would wake up tired the next morning, need their afternoon nap, party until 9:00 PM and this whole cycle just continued. For me it made better sense to pull the daytime nap and have my children going to bed at the same time at 7:00 PM.

Some prefer the break during the day

For me that was the way I preferred it. I liked having my evening free. However, I have had clients who tell me, You know what? I don’t mind if she goes to bed a little later in the evening. I really enjoy that little break in the day.

It’s perfectly fine to keep the afternoon nap. I’ve had clients who their childs three, three and a half, and still happily taking an afternoon nap. You just need to know then that bedtimes going to be a little bit later.

By later I mean 8:00 PM, 8:30 PM. Try not to go any later than that. That’s absolutely fine, but when you do decide that its time to end that daytime nap, I prefer that you do things 100 percent. I find that the body clock has an easier time falling in line with consistency rather than sometimes she naps and other days she doesn’t. That’s going to affect the bedtime as well. Then sometimes she’s going down at 7:00 PM, other times later.

Once you’ve made the decision, just go for it. The nap is gone. What I suggest you do instead, is something I call quiet time.

You would still engage her in nap time activity in her bedroom, something quiet like maybe looking at some books or doing some coloring, playing with some cars, building with Legos, whatever it is thats enjoyable for your child.

Get her bed up with that. Then say, Mummys going to go and have a cup of tea. I’ll come back for you when quiet time is over. I find it helpful to set a timer. Maybe give her 30 minutes or so of independent play.

I find that just that little break in the day where shes got some time to be on her own and do a quiet activity and have a break from you, can be enough to take that edge off a bit.

You’re not having a late afternoon meltdown as she is transitioning out of this nap. Also keep in mind it takes the body a good four weeks to adjust to a significant change in how were sleeping.

What you should expect:

You should expect that for four weeks you might have some rough days where shes pretty tired and maybe a bit cranky in the afternoon but push through that.

Even if its a bit of a tough slog some days, just know that once her body has adjusted to this she’s going to have lots of stamina to make it through the day. 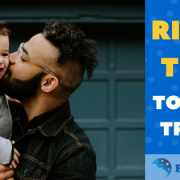 My baby won’t sleep. Why? 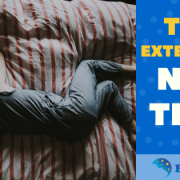 Clocks Going Back – How to Save Your Child’s Sleep Routine

Is This the Right Time to Sleep Train?
0 replies

What To Do When Your Baby Wakes Too Early Will Cereal In A Bottle Help My Baby To Sleep?
Scroll to top