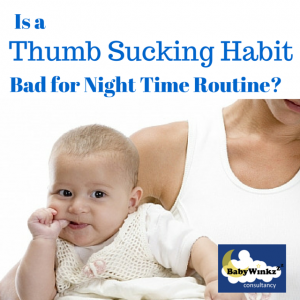 I get a lot of emails from people whom are interested in working with BabyWinkz asking about my thoughts on thumb sucking. Generally their question are similar to this: “Judy, I’ve noticed she’s started putting her thumb in her mouth as her way of self soothing. I don’t know if I should be encouraging it, discouraging it, what should I do?”

To Encourage or Discourage… that is the question

Well, there will be people who disagree with me on this one, but I’m just going to say what I think regardless. Babies who discover their thumb turn into very good sleepers, because they have the ability to self-soothe and it’s attached to them. It’s not lost in the cot. It’s not reliant on mother breast feeding or bottles in the mouth or anything else. It’s independent in the sense that it belongs to them, they know how to use it, and they use it well.

The truth of the matter is that most children who develop a self-soothing strategy that involves a finger or a thumb only use it in those few minutes it takes to get from one stage into the next. You’re awake, you’re getting sleepy, you’re ready for sleep to come, the thumb goes in, minute or two later, they’re fast asleep, thumb comes out.

You cannot keep your thumb in through all your sleep cycles. It’s absolutely impossible. It’s not like they’re in there with their thumb in their mouth all night long. When they have a little brief wake in the night, they might use it again for that minute or two it takes to get back in, and that’s it.

What if it becomes a problem?

Occasionally, it becomes a long lingering problem. Everybody knows a 12 year old who still sucks their thumb; or some horror story like that about thumb sucking. The truth is there are definitely strategies. If you notice your child’s lingering a little too long with it, we can curb it with behaviour management.

You can even do it discreetly. If you notice your toddler sticking it in there when she is watching TV or in the car, you can just gently remove it and maybe replace it with something else, a beaker cup of water or a little bit of a snack. You can ease out of it just with a little bit of redirecting. I don’t want you to worry too much about it.

The other thing people always say is, “Well, if I give them a dummy/pacifier instead, then I can take the dummy/pacifier away. I have the power over that.” Do you want to know a little secret that lots of parents don’t tell you? Even though they tell themselves they’re going to take it away, they don’t.

I cannot tell you how many people have confessed to me that their five year old still sleeps with the dummy/pacifier, because it’s your child’s sleep strategy. It’s like if you sleep with a pillow every night, are you, all of a sudden, going to decide, or let somebody else decide, that “I’m taking it away from you tonight”?

It’s emotional. It causes the child emotional distress. It causes the parent emotional distress, so they don’t do it. They just dance around it and say, “Oh well, it’s OK, it’s OK, it’s OK,” and they don’t do it. That is a problem as well, using a dummy/pacifier to sleep. It’s not an appropriate way to sleep through the night. It gets lost, they have got to find it. They put 20 in the cot, or in the bed with them to hope that they find one in the middle of the night. That’s not a good strategy for becoming an excellent sleeper.

I have written other blog posts about my thoughts on dummies

To dummy or not to dummy – The Dummy Debate

Keep that in mind. Don’t panic. Don’t let your mother in law tell you, you should put gloves on her, or try to discourage it. Again, like I said, most babies don’t use it long term, nor do they have a thumb stuck in their mouth all day long. Just chill about it and let it happen. Again, like I said, if it does become a long, lingering habit, I’ll help you get rid of it.

Is this information useful to you, family or friends? I would love to hear your thoughts. Look forward to conversing with you on Facebook and Twitter. The information you share will benefit other parents.

Question Time with Judy: My baby is crying at night, what shall I do?
Get Your Newborn to Sleep Longer…
Tips for Dealing with BST (British Summer Time) & Your Baby or Toddler Sleep Pattern
Sleep Methods – Helping and preparing toddler for new baby arrival
Melatonin for Baby…No Way!
5 Tips for Healthy Sleep Habits and a Happy Child
0 replies

Toys in cot, Yes or No? Is Your Toddler Not Sleeping at Nursery?
Scroll to top