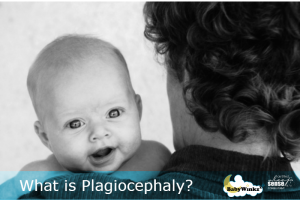 Most of us have noticed that babies sometimes have a flat spot at the back of their heads. And while its no cause for alarm, it can be a bit unsettling if it appears on your own baby.

This condition is referred to as plagiocephaly, and the most common form (positional plagiocephaly) happens when babies spend a lot of time lying on their backs, as babies often do. Infants skulls are soft and pliable, which means prolonged pressure against a mattress or a blanket on the floor can create a flattened area.

Where does it start?

Plagiocephaly can also start in the uterus, where movement might be restricted for a variety of reasons. There is also a birth defect called craniosynostosis, in which the joints between the bones of the skull close up early. Babies born with this form of plagiocephaly will need surgery in order for their brains to grow properly.

Most babies that are born vaginally will have a cone-like shape to their head at first. This is totally normal and is just caused by the pressure in the birth canal. It will usually fix itself within six weeks, but if it continues past the six weeks, you’re probably dealing with positional plagiocephaly.

So whats the solution?

In most cases flat spots on your babys head will naturally round themselves back within a few months, but any time you notice a flattening in your childs head you should talk to your doctor. You want to nip the condition in the bud before your babys skull becomes harder and less pliable.

We now know that putting babies to sleep on their backs greatly reduces the chance of SIDS, so having babies sleep on their tummies isn’t the solution. If its a mild case and your baby is young, your doctor will probably suggest re-positional therapy. This just means changing your babys position regularly and doing exercises that strengthen the neck.

Alternating sides when you bottle-feed

Placing baby at alternating ends of the cot when you put her to sleep. Children will naturally turn to look out at the room as opposed to the wall. Make sure baby gets lots of time on his tummy during the day. This will prevent his head from resting in the same place and will also strengthen neck muscles.

Try not to leave baby sitting in one place where her head is resting against a car seat, baby swing or stroller.

Physical therapy could also be recommended, and it can be quite successful in solving the problem and gently increasing the range of motion in your babys neck. In more extreme cases, or if these other methods dont seem to be helping, your doctor might suggest cranial orthotic therapy, which involves using a helmet to change the shape of the head.

While plagiocephaly might look strange or worrisome, its nothing to be scared about. However severe the case is, theres a treatment that is bound to help.

Is It Too Noisy For Baby To Sleep?
How to recognize “sleep signs” in your child
Napping & Sleep: When and How Much for Infants, Toddlers & Preschoolers
Melatonin for Baby…No Way!
Question Time with Judy: Breaking the habit of a nightly bottle feed
Question Time with Judy: Really hard time keeping baby awake through her bottle at the bedtime routine?
0 replies

Why is my Baby Not Sleeping? Sleep Training Twins who Share a Room
Scroll to top