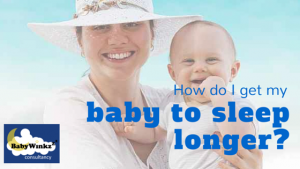 Get your baby to sleep longer…

Today, our question comes from Marnie, and she writes,

“My one-year-old is waking up at 4:00 AM, and won’t go back to sleep even after I nurse him. He then, struggles to make it to his first nap of the day. He goes to bed at 7:30, and has two solid naps during the day. How can I get my baby to sleep longer?”

First of all, Marnie, you are not alone in this. This is the number one question that I get from parents every day, their baby’s waking up too early. I got three tips around that for you, Marnie. The first would be to have a look at darkness. That’s always the first place I look, especially, as the summer months are upon us, we really need to keep light out.

People often think that they’ve got it dark enough, but it can always be darker, because even the slightest change in light variation can stimulate a wake up in anybody. As an adult, you can look at the clock and notice that it’s not time to get up, yet. A baby can’t do that.

I want it dark in there. I want it to be as dark as it would be if you walked in, in the very middle of the night.

Actually, it’s a concern number two, let’s call it, Marnie, is the fact that you’re nursing him at 4:00 AM. Given his age, there should be absolutely no reason why your child would need a night feed.

My worry with this is that, that 4:00 AM might actually get earlier and earlier and earlier, instead of buying you more time, because to the baby, there’s no difference between a 2:00 feed and a 4:00 feed. I want you to consider pulling that.

There’s absolutely no reason why he would need it. You might actually be stimulating him and waking him up. After his nurse, he goes back to the crib and thinks, “What are we doing here? I feel ready to go. Let’s start the day.” That’s why you’re having the struggles that you are, OK?

The morning nap. You’ve mentioned in your question that he’s having a really hard time making it till his first nap of the day. I find that what can happen is, if a baby wakes up too early in the morning, gets up, starts his day, he’s going to be fatigued fairly quickly.

It’s tempting to start putting him down earlier and earlier and earlier for that morning nap. You don’t want to do that. If you do that, you will get stuck in this viscous cycle of him waking up too early, going down for a nap at 7:00 AM, and throwing off your whole day. That will just absolutely mess up with his body clock. You’ll have to have a third nap, which will be completely foreign to him, and it’ll just cause a whole bunch of problems.

Even though it’s really tough, and I totally understand that, you’ve got to hang on to his normal nap time. If it’s 09:30 AM, even if he’s been up since 04:30, you’ve got to hang in there until 09:30. My advice would be to give him a bit of fresh air around eight o’clock, make sure that you give him enough snacks and food to keep his energy levels up, to really encourage him to hang in there.

It’s similar to if you got up at 04:00 AM, wandered around, maybe had a snack, and then eventually went back to bed and finished your night. That’s what’s happening here, most likely. Hang in there until the first nap of the day. I always suggest that people do not change bedtime. That is super tempting when you’ve got an early riser. You think, “Oh, if we just keep him up late, he’ll sleep later in the morning.” That hardly ever works.

In fact, all you end up doing, then, is creating a huge amount of over-tiredness in your child, which leads to more fragmented sleep and even earlier morning wake ups. Whatever you do, don’t do that.

Baby Sleep Routine & Christmas Shopping – 5 Tips to Keep You Sane
Question Time with Judy: My baby is crying at night, what shall I do?
Tips for Dealing with the End of Daylight Saving Time
Sleep Train During the Holidays? Yes it is a good idea…
Clocks Going Back – How to Save Your Child’s Sleep Routine
Sleep Seminar in Kenya
0 replies