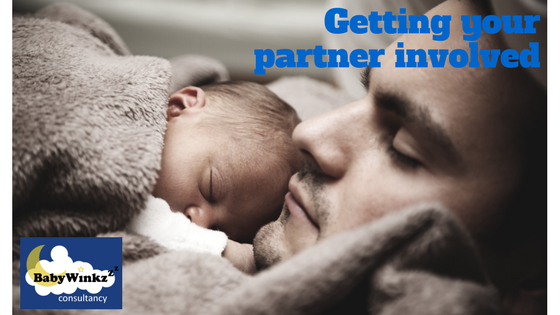 At the risk of generalising here, it’s been my experience that there’s usually one parent who handles the bulk of the night time responsibilities.  And that parent, in a man/woman relationship, is almost always Mum. Now, before you go accusing me of sexism of stereotyping, I’d just like to point out that there’s a reason this happens.

As a sleep consultant, I don’t get called into situations where both parents are contributing equally, and where baby’s not relying on any external props, and everyone sleeps soundly through the night.  Anyone who calls a sleep consultant in that situation either has money to burn or has mistaken me for a dream interpreter. I’m usually contacted by parents who are having issues getting their babies to sleep, and that’s almost always because baby’s got an external sleep prop that they use to get back to sleep when they wake in the night. And the most common prop I see, by far, is nursing, which pretty much leaves Dad out of the equation. Now, this is a problem for a couple of reasons. Obviously, if baby’s waking up six times a night and demanding Mum come in to nurse her back to sleep, that’s taxing on mother and baby. But there’s another person who tends to suffer in this scenario, and that’s Dad.

It might be hard to imagine, if you’re currently reading this in the middle of the night with a baby hanging off your breast, listening to your husband snoring contentedly from the other room, but it’s true. Dads, the vast majority of them anyway, want to be great dads. They want to have an active role in bringing up their kids, and they love it when they feel like they’re succeeding in that role. But because Mum is the one with the magical breast milk, Dad often feels powerless to help out in the sleep department, which means Mum’s up every time baby cries, and Dad, while sympathetic, can’t do much but go back to sleep. This can lead to some hostility from a sleep deprived Mum, who feels like she’s doing more than her share, and some defensiveness from Dad, who gets to feeling attacked for something he has no control over. But here’s the good news for both of you…If you’ve decided to give sleep training a try, it often goes better if Dad takes the lead. That’s right! Take a load off, Mum. Dad’s taking point on this one. Because Dad doesn’t nurse, and baby knows it. So, when it comes to breaking the association between nursing and falling asleep, baby tends to learn quicker and respond better when Dad comes into the room during the first few nights of baby learning to fall asleep independently.

Here’s the funny thing. Whenever I drop this little tidbit on couple I’m working with, Mum lets out a big woot-woot and teases Dad about how he’s much fun he’s going to have getting up six times in the night.  But then, night one, as soon as baby starts to cry, Mum shoots out of bed and goes straight into baby’s room. Or even more regularly, Mum stands in the doorway instructing Dad on the right way to settle Baby back down and corrects him every step of the way. I have literally sent full-grown women to their rooms in this scenario.  If Dad’s going to get involved, he and Baby have to find their own rhythm, and Mum needs to have little to no part in it. And as much as they always say they’ll have no problem letting their husbands take the wheel, when it comes down to the moment of truth, many women have trouble giving up control. So remember, Dad might just be the magical solution to your baby’s sleep issues, but you’re going to have to let him take over. Take heart though. Most of my clients see dramatic improvements in their baby’s sleep in just a couple of nights, so you won’t have to control yourself for long. After that, you and your partner will have the evenings back to yourselves, and your whole family can get back to sleeping through the night.