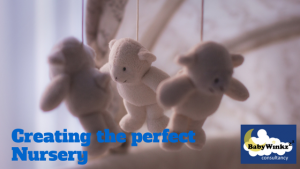 When you first got pregnant, how long did it take before you started visualizing what your baby’s nursery was going to look like?

Go ahead. I won’t judge. Because for me it as once I had passed my second trimester.

I knew I wanted a Winnie the Pooh theme and wanted my baby to feel like she was in the 100-acre woods! I wanted her to feel like she was in an enchanted place! I searched the internet and found a painter who was able to do a 3D Muriel of exactly what I had imagined!! When I think of how much it cost to have this done I actually gasp! But at the time all I could think of was having the perfect nursery for her

If I had known then what I know now, I would have painted it a nice, neutral earth-tone and spent the rest of my resources researching cot sizes, mattresses, sleep sacks, video monitors and room temperature monitors!

Because when it comes to nurseries, I’ve got four words of advice for you.

I know how tempting it is to stuff baby’s sleeping quarters full of adorable mobiles, inspiring images, and fluffy, squishy toys. After all, wouldn’t baby want to be surrounded by a sea of cuteness while they drift off to sleep?

I mean, they may like it in theory, but it’s not conducive to a good night’s sleep, for the same reasons that you shouldn’t bring your iPad to bed or watch TV while you’re drifting off. It’s stimulating, and stimulation and sleep are best kept at a distance from one another.

I still remember the day I had to move my then 18-month-old to my bedroom, move my then 5-month-old to her nursery and my husband and I move to the living room floor.  We spent 6 months on that floor till we were able to move to a bigger house! Why? You ask. Well The Winnie The Pooh theme started stimulating my daughter, she has always been very sensory sensitive and although she had been a great sleeper from when I first trained her as a baby, an incident at nursery topped up with a very stimulating room, and I can only think what must have looked like a gigantic bear on the wall triggered off a very serious regression! The first night it all started my daughter cried most of the night and I counted that that night she must have got 3 hours total sleep! Nothing we did could comfort her! I stayed in her room with her, I comforted her but nothing I did would calm her. She seemed confused and just kept looking around her room! The next night I observed her on the video monitor pointing to the walls and pacing up and down the cot and crying as she kept pointing to the walls and calling out Pooh bear! Then the penny dropped! She couldn’t switch off and each time she stirred she was stimulated. A few nights later and switching rooms to a very bland plain walled room, she was able to return to her normal sleep pattern and back to sleeping through the night.

I’m talking pitch black. Some blackout curtains or blinds are a much better investment than a colourful mural. I’m a huge advocate of baby sleeping in the same place all the time, which means naps should also be in the cot. And you’ll find naps go down with a lot less fuss if there’s no light coming into the room.

It may sound cold, but studies show that babies sleep best in a room that kept between 18 and 21 degrees. Obviously, you should follow your baby’s lead on this, but a warm, comfortable sleep sack or onesie in a cool room will often lead to better sleep than no cover in a warm one.

Babies sleep for nearly half the day, so a great mattress is a sound investment. It’s well worth your time to do some extensive research and spend the money you had set aside for mobiles and stuffies on the surface baby’s going to be spending the vast majority of their time on. Which brings me to my major point…

Music and soft light, pictures of Disney characters, swirling colours and little plastic fish, all of them seem like they should have a calming effect on a baby, but it’s just the opposite. These standard nursery accompaniments are distracting and stimulating. Blank walls and an easily accessible changing station, those are your best decorating choices when it comes to baby’s bedroom. Remember I learnt the hard way!

I know it’s probably a little bit of a tough pill to swallow for new parents, because we really do look forward to putting together a little corner of baby-themed paradise for our little ones, just like I did! But bear in mind, this room serves a crucial function in your baby’s day-to-day life, and that’s to be a quiet, relaxing environment for them to get the extensive amounts of sleep that their growing bodies need.

There will be plenty of opportunity for them to adorn their rooms with extensive amounts of knick-knacks when they’re teenagers. It’s already started in our household, Jannah is now 8 going on 18 and she has already started talking about how she wants her bedroom redecorated!

Should I Hire a Sleep Consultant?

Getting your partner involved
Scroll to top