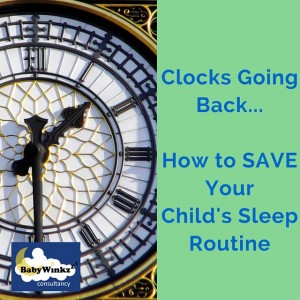 This year, on Sunday 25th October at 2am the clocks going back one hour. For us, this means that we get an extra hour of sleep but essentially, this changing of the clocks does affect us in some way and ultimately it can add to our lack of sleep.

It takes a huge effort from parents to eventually get your child into a good pattern of sleep so that they sleep through the night. Therefore, any kind of alteration to the patter will only be in the short-term which means that they will soon get used to the new pattern. The most effective way of dealing with them is to use the “Split The Difference” Routine.

1. On the Saturday night before the clocks change, make sure that the clocks are left alone, this way the change does not affect you or your family in such a large way. Stick to your usual routine of getting up at the same time and then following your breakfast proceed to change every clock in the house. This way the change will have less of an impact.

2. Try to keep the amount of naps and when they occur to the same times as previous to the change in time, but just adjust it by 30 minutes for the following three days, making each nap slightly earlier.

3. Ensure that food and milk times are also adjusted in the same way.

4. When it is time for bed, adjust the time so that your child goes to sleep 30 minutes earlier than they usually would.

5. As you will notice, your child is now going to bed earlier than usual but the change is not large enough for it to cause too many problems. Your child may take slightly longer to fall asleep as there is every possibility that they are likely to be less tired but over the course of a week they will adjust and get back into their usual schedule.

6. For those children over the age of two it could be worth moving the clock forward by around 30 minutes whilst also allowing them to get up earlier than usual. This will mean that by the end of the week they will sleep until their usual wake up time.

7. If you have a baby then it is not possible to do this, but it is important to try and refrain from going into their room when you hear them wake as this could give them the signal that waking up earlier than usual is fine. Therefore, from the time they wake up, leave them for ten minutes on the first day, then extend that to twenty minutes on the second day and eventually thirty minutes on the third day. This will help them to adjust to the new time which will help them to wake up at their usual time.

8. When the fourth night arrives it is important that you begin using the new time. This will result in your baby having their naps at the correct time during the morning and afternoon whiles also going to bed at their usual time.

Every Child Is Different

The key is to remember that every child is different, so if they do not fall into the new routine as quick as you hoped do not panic. Sometimes children can take up to two weeks to become used to a new sleeping pattern but do not allow yourself to return back to the old ways because you have simply put in too much time and effort. Allowing your child to sleep with you or giving them a dummy or even feeding them milk will of course help immediately but it will lead to problems in the future.

IN REAL TIME: Baby Self Settling

Is My Baby Sleeping too Much?

Pros and Cons For Swaddling Your Baby White Noise? What is that and can it put babies to sleep?
Scroll to top