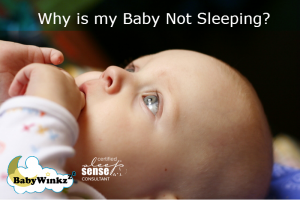 Is your baby not sleeping?

This weeks question comes from Angel. She writes:

“Help! My baby’s one year old and does not sleep. He has a one hour nap in the morning, but then doesn’t have another one all day. He plays all day and into the evening, and doesn’t usually go to sleep until midnight. Then wakes up about two-ish — sometimes he’ll settle and sometimes he doesn’t. If he does, he’s up for the day at five a.m. and thats it! So in 24 hours, he sleeps five hours. Is there something wrong with him… or is something wrong with me?“

Well, you know this is a pretty extreme case, Angel. But I think it’s a good question because a lot of people write in on the blog wondering about how much sleep their child should be getting, how to increase nap lengths, and how to increase nighttime consolidation. So even though it might not sound as if you’re in the same situation, I think this is a good example for how we can increase sleep.

First of all, this is far below any kind of sleep requirements. Five hours is not enough for an adult, it’s definitely not enough for a one year old. So, I think that you do have a fairly serious problem, but I think its one that you can definitely fix.

Now, you haven’t gone into too much detail on how he actually falls asleep when sleep does happen. My guess is that he uses a variety of props, or at least one prop. Perhaps you rock him to sleep or he falls asleep eating or nursing. In some cases he might just fall asleep from sheer exhaustion, which wouldn’t be too surprising given his schedule.

How is he falling asleep?

And so I want you to first look at how he falls asleep. And that’s always the first place to start when you have a child who’s not sleeping well, is to look at what are the things this child thinks he needs in order to fall asleep. And then you want to start making some changes to that. I mean ideally what you want your child to understand is that when you feel the feeling of fatigue, that the best solution to that feeling is to go to sleep. But what can happen with some children who have some anxiety is that they play harder, they run faster, they do more to fight it, to push it away. And you can push it away. I mean if you are really tired and you push through it, usually you’ll catch your second wind and then that’ll carry you on until the next time you crash. And so I would guess that that’s what he’s doing the majority of the day is pushing through his fatigue instead of honoring the feeling and using sleep to alleviate the symptoms.

So, given his age, what I’d like to see his schedule start to look like is going to bed about 7:00 p.m., waking up at 7:00 a.m., and taking one afternoon nap about 12:00 or 12:30 p.m. And so thats going to seem like a big jump considering he goes to bed so late and doesnt sleep through and barely takes a nap. But I want you to go ahead and give it a try because a lot of times when you let overtiredness take over, thats when he starts kicking into high gear and getting really active. So try to catch it before it becomes that.

So, lets just say if you started today, for example, you know he got up at five-ish I’m guessing for the day and then I would try to schedule his naptime about 11:00 a.m. given the fact that he’s an early riser at the moment. And what you want to do is create a bit of a routine before nap. So maybe read a story or two, then he should go into his cot awake, so he can start figuring out how to do this on his own, and you can use the “stay in the room method” if you want to be with him and sort of be a coach for him while he learns this new skill, or you can do a “leave and check” strategy where you go in and out every five minutes or so to check on him and be supportive and then leave again. So either way, its up to you, but you do need to really get on board and start teaching him how to do this.

So then lets say he took an hour nap, which is his norm, then I want you to try for a bit of an earlier bedtime, and that would be a 6:00 p.m. bedtime given the fact that he rose early, napped early, and now he’s going to go to bed early. And do a half an hour bedtime routine to start signaling to his brain and body that its making that transition into night. So, a bath is a good example, and then into pj’s, maybe a snack or a last feeding (keeping him awake for the feed) and then into the cot awake. If you’re staying in the room, you can do that method where you wean yourself out of the room over the course of a week or so, or you can leave and check. And once its night, its night. So at 6:00 p.m. that’s bedtime.

What you’ll find is that the more he practices this, then gradually his schedule will adjust and he’ll probably start sleeping a little later into the morning, then you can move nap down a little bit, and then you can move bedtime down to about 7:00 p.m. But it takes the average person four to six weeks to adjust to a fairly significant change in your sleeping habit, so you should not expect this to just fall into place automatically. And there will be days where it feels like a bit of a push, but its very important to go ahead and do this because he definitely does need more sleep!

Comfortable and safe sleep environment for your baby
Is My Baby Sleeping too Much?
Melatonin for Baby…No Way!
Baby Won’t Sleep Cause of Sickness? 5 Expert Tips on How to Care for Infant
Tips for Dealing with the End of Daylight Saving Time
How Much Sleep Does A Baby Need Daily?
0 replies